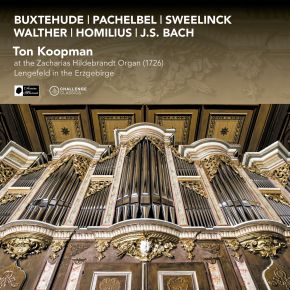 SUMMARY
In 1724, Zacharias Hildebrandt was commissioned to build a new organ. In 2010 a pre-examination by the organ builders Kristian Wegscheider of Dresden resulted in a sensational find: unusually well-preserved seventeenth century pipes which probably originated from the precursing instrument built by Christoph Donat in 1661/62. This set of pipes, probably the oldest surviving in Saxony, was used by Zacharias Hildebrandt for his new organ. Between 2010 and 2014 they were jointly restored by the organ building firms of Hermann Eule, Bautzen, and Kristian Wegscheider, Dresden
MUSIC
Ton Koopman: This masterful Zacharias Hildebrandt organ includes seven seventeenth century stops.  For me, that is a good reason to perform not only works by Johann Sebastian Bach and his contemporaries – Bach was a great lover of Hildebrandt organs – but also music from the seventeenth century.
During his time, Dieterich Buxtehude (c.1637-1707) was very well-known as an organist, composer and organiser of the famous “Abendmusiken” in Lübeck. Like Buxtehude, Johann Pachelbel (1653-1706) was a master of the ostinato bass. We know of eight chaconnes written by him, although not all of them survive in their  entirety. This Chaconne in D minor is the only one of which we can be certain that it was written for organ as it includes an obbligato pedal part Jan Pieterszoon Sweelinck (1562-1621) lived and worked in Amsterdam as a  composer and organist and was also a famous pedagogue. I have chosen a masterful Fantasie, as well as an arrangement of the Christmas carol Puer nobis nascitur, played here using only the seventeenth century stop. Johann Gottfried Walther (1684-1748), a distant cousin of Johann Sebastian Bach, was an eminent music theorist, composer and copyist. This recording includes a concerto after Tomaso Albinoni,  alongside a beautiful chorale arrangement. Gottfried August Homilius (1714-1784) may have been a student of Johann Sebastian Bach. In Dresden, he was organist at the Frauenkirche. Johann Sebastian Bach (1685-1750) should of course not be missed out in this context. His early Prelude and Fugue in C minor is written in the stylus phantasticus, full of  youthful energy in the pedals, as well as the manuals. Much later on, Bach composed another Prelude and Fugue in C minor (BWV 546) – a completely different world. Then we have Bach’s possibly most complex organ work of all: Vater unser im Himmelreich from the Clavier-Übung, Part III. The complex canon technique and the many different rhythms are characteristic; but first and foremost it is a poignant piece of considerable duration. This is followed by the simple but wonderful Canzona in D minor (played on manuals only), and a chorale arrangement without a BWV number – however, when one hears it there cannot be any doubt that this work originates from the pen of Johann Sebastian Bach. To end, one of his most significant and brilliant compositions, the Passacaglia in C minor, which sounds especially appealing played on an organ tuned after Neidthard.

Congratulations to one of greatest Bach performer of our time! Kalevi Kauppi Finland