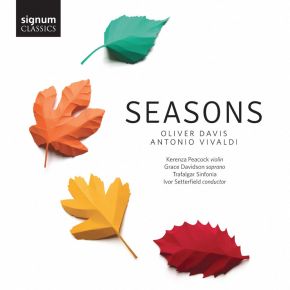 Seasons combines Antonio Vivaldi’s timeless concerto cycle The Four Seasons, performed by the Trafalgar Sinfonia and soloist Kerenza Peacock, with a new contrasting composition by British composer Oliver Davis. Inspired by the same set of poetry upon which Vivaldi based his Four Seasons, Davis’s new work Anno, performed by Grace Davidson, is a composition for orchestra and solo soprano. This release follows the success of Davis’s debut Signum album Flight earlier this year (SIGCD411): “... exuberant works are performed with charisma and sensitivity by Kerenza Peacock and the LSO.” (BBC Music Magazine) Since graduating the RAM in 1994, Oliver Davis has composed and produced numerous concertos, albums, soundtracks and television scores working with all the major London orchestras.