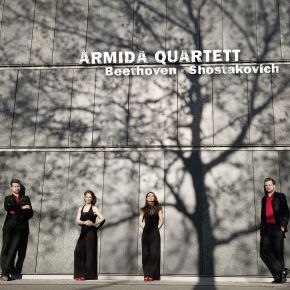 Martin Funda, leader of the Arminda Quartet, states, “Opus 59 is extremely challenging. One needs time to grasp these pieces. As performers, we are surprised again and again to note how quickly Beethoven starts leading us into unfamiliar waters. The F Major Quartet is an ‘extrovert’ piece; at the same time; it contains a series of incredibly profound moments and a variety of different moods which we have to learn to interpret.” In comparison, Shostakovich’s Opus 118, also featured on this recording, is surprisingly carefree at first glance. He wrote this work at his retreat center in the Armenian spa town of Dilijan, and the relaxed atmosphere can be heard in the writing. Armida Quartet was founded in Berlin in 2006, and took their name from an opera by Haydn who was the “father of the string quartet.” Since their inception, the group has won numerous awards, most notably First Prize, Audience Prize, and six other awards at the ARD International Competition in 2012.