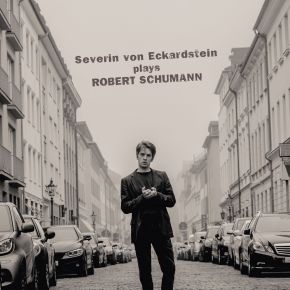 'The term 'fantasia', in music, mainly refers to a free type of structure. Throughout history, the genre has allosed composers to jot down their musical ideas directly, like an improvisation, just as they first spring to mind. The fantasia became a popular instrumental genre in the 1800's, when it started to feature the dreamy, 'phantastic' element even more prominently; the piano and its universe of polyphony likewise played an essential role. The fantasia was thus an ideal genre for Scumann, whose music I view as the quintessence of German High Romanticism. Schumann's music is full of expression and driven by passion; at the same time it is disarmingly honest and private. Its textural sonority is full of variety, yet it always remains decent and straightforward, never attempting to posture with easy, flashy, superficial effects or by adding purely virtuosic embellishments. In my imagination, this music often evokes placid romantic scenes imbued with good-naturedness and a certain vulnerability: people of the simple classes, courtly settings, flowery childish joys, or the secretly shared yearnings of two lovers. It is as if such figures or allegories were placed in the midst of mysterious landscapes, lovingly painted with an eye for detail, and impressively set to music. Schumann often used teh word 'Fantasy' in the titles of his works - frequently as part of a compound noun, Fantasiestüc, or also sporadically Fantasietanz (dance). The music in such pieces is often of choice quality and profoundly expressive... (Eckardstein)