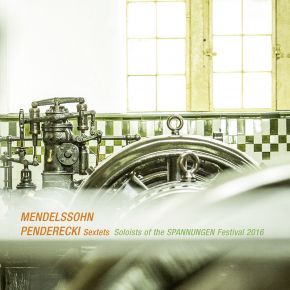 Soloists Of The Spannungen Festival 2016, Sextets

The work’s high opus number should not mislead us: Mendelssohn composed his Sextet for piano and five strings when he was only fifteen years old. Here one will not yet find innovative writing of the caliber of what Mendelssohn would soon produce in the Octet or in the Overture to “A Midsummer Night’s Dream”. Louis Spohr and Hummel still hold sway as conventional musical models, but at least the agile Menuetto exudes Mendelssohnian flair, rushing on by with the grace of a fairy. The work was not printed until 1868, twenty-one years after Mendelssohn’s death, and has not circulated widely since then. Mendelssohn biographer Eric Werner described this work as a “miniature chamber concerto for the piano, contrasting the latter with the five other instruments. Along with Witold Lutosławski, Krzysztof Penderecki is regarded as the most outstanding Polish composer of the 20th century.

Starting in the 1980s, Penderecki abandoned all avant-garde tendencies and has been increasingly using the music of the 19th and early 20th centuries as his models. With a generous playing time of 35 minutes, the work presents itself as a reminiscence of great Slavic composers of the 20th century. Here one can easily detect Penderecki’s penchant for Stravinsky, even more so for Bartók and, above all, for Shostakovich. As Penderecki once put it himself: “I am, of course, a Slavic composer who is mainly interested in communicating his emotions through musical expression.”