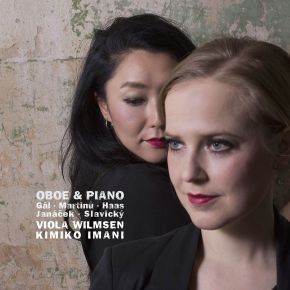 BEYOND “BEAUTIFUL SONORITIES”
What types of musical character do we associate with the oboe? We imagine long, lyrical phrases, mournful, fragile melodies, agile musicianship, and a folk-like character. During my time as principal oboist in the orchestra of the Deutsche Oper Berlin, it felt as if I died “a thousand deaths” every evening until the main character on stage had finally breathed his/her last sigh and the sobbing oboe had sung its plaintive melody to the end. On the other hand, have you ever heard an oboe sonority that is fierce, conquering or threatening?

The 20th century produced a number for works for oboe and piano in which the woodwind instrument adopts an almost “furious” character. In this program we would like to demonstrate the oboe’s variety of tone colour and great versatility. Our basic idea is centered on the oboe as a “singing voice”, with its tremendous ability to phrase long cantilenas: hence, this program is closely associated with the human voice. We have selected three works originally written for oboe, along with two brief vocal works we have arranged for the instrument. Unpretentious works from the youth of a composer such as Martinů stand alongside dramatic late works such as Pavel Haas’s Suite, which he originally conceived for voice but later arranged for oboe. Here we combine the original sources of inspiration –Moravian folk songs – with a series of works heavily influenced by Moravian folk music: the Suites by Pavel Haas and Klement Slavický, as well as Leoš Janáček’s opera Jenufa.

Oboists are increasingly performing Klement Slavický’s Suite in view of its many qualities: a series of technical challenges, a pastoral, quasi-improvised first movement, and attractive bravura passages in the Scherzo as well as in the fourth movement.……….. With the exception of Leoš Janá ˇ cek, all the composers on this CD were of Jewish faith, and shared the bitter experience of having been forced to flee their homeland or at least to give up their profession. Perhaps in times such as ours, when nationalism and racism are on the rise, these musicians’ destinies can inspire serious reflection and serve as a warning to us all.© 2017 Viola Wilmsen (liner notes)