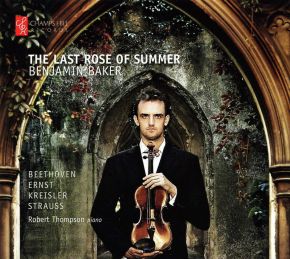 Richard Strauss wrote his famous Violin Sonata in his early twenties, inspired by a summer in the Italian countryside, and by falling in love with Pauline de Ahna in the same year, who was later to become his wife.

Beethoven was just starting to realise the horror of losing his hearing by the time he wrote his Violin Sonata No.2 in his late twenties.

Kreislers Alt-Wiener Tanzweisen (Old Viennese Dances) are salon pieces which describe aspects of love including joy, sorrow and eternal love, the last of which he dedicated to his wife.

The hauntingly beautiful poem by Thomas Moore upon which Ernst based his The Last Rose of Summer variations captures the intensity of love, of loss and of the youthful questioning of the future. The title of the Irish air the poem is set to is The Young Mans Dream, originally Aislean an Oigfear.

Born in New Zealand in 1990, Benjamin Baker first picked up a violin at the age of three. Four years later he had notched up seven television appearances in New Zealand and played with the celebrated violinist Nigel Kennedy, who recommended he apply to The Yehudi Menuhin School in London. In 2007 Benjamin's debut at the Royal Albert Hall with the Royal Philharmonic Concert Orchestra was described by The Daily Telegraph as hugely impressive.