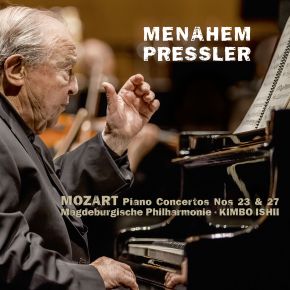 “…..Pressler has played Mozart’s piano concertos with such frequency that they can be reckoned among the works that have occupied him the most in his life. Fortunately, a wish that Pressler and the musicians of the Magdeburg Philharmonic Orchestra had been having for many years finally came true: in May and December 2016, Pressler performed as a soloist in his home town. In May he performed Mozart’s Piano Concerto in B Flat Major K595, and in December he played the Piano Concerto in A Major K488. On the subject of Mozart, he remarks: “In Mozart there are no ‘empty’ passages. Musicians often just ‘play through’ a passage because they can play it well, and they are satisfied with that. However, if the interpretation of a passage has no content, I become adamant. I know it’s hard to phrase everything correctly. But I am still as critical as I ever was. First of all toward myself, then toward my co-performers.” Fortunately these concert performances in May and December 2016 were recorded. For a performer who had then reached the age of 92 (and who celebrated his 93rd birthday on the occasion of the second Magdeburg concert on 16 December 2016), one can hear that those aforementioned daily hours of practice have truly been worth the effort. Pressler, the experienced musician, phrases the piano part with unmatched
nuance. In the framework of moderately chosen tempi he masters every technical hurdle in each of these two masterpieces. Most of all, one can immediately tell that we are dealing with a pianist who not only knows very note of these concertos, but who has made each of them his own. Although Pressler has recently made several recordings on CD, these Mozart concerto recordings might be the last recorded testimony of one of the great performers of our time……”  (Excerpt from the Liner Notes)