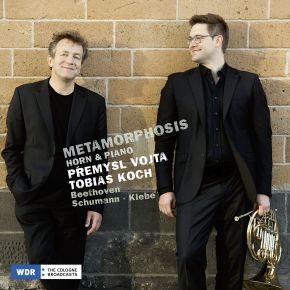 Alteration and transformation, influence and interaction! The horn and the piano have gone through immense changes over the course of time, as this recording with works by Beethoven, Schumann and Klebe intends to illustrate. The natural horn, the Romantic valve horn and the modern horn enter in dialogue with the fortepiano, the Romantic piano and the modern grand. We embarked on an adventurous musical expedition in the recording studio by dealing with three different types of horns and three different keyboard instruments in the course of three days, thereby attempting to span a wide musical range that depicts the transformation of the historical timbre ideal, condensed as in a time lapse.

Yet we never regarded this project as a purely instrumental challenge. Our intention, instead, is to show how the language of musical composition itself has undergone profound change on the basis of certain instrumental modifications. The distance covered is immense: from Beethoven’s Horn Sonata, still entirely immersed in the style of the late 18th century, passing through Robert Schumann’s Romantic attitude and leading to Giselher Klebe’s Alteration of Beethoven’s so-called Moonlight Sonata, thereby creating a technically challenging work with perspectives that mirror a multitude of tendencies. It is no coincidence that our programme, in so doing, returns to Beethoven, albeit experienced in a very different way: in Klebe’s work, innovative, revolutionary elements of composition and instrumental technique are directly noticeable.

Each of these works possesses its own style. Instead of striving to ‘homogenize” the timbre, we attempted to find individual musical identities, which can be easily perceived thanks to the variety of instruments used on this recording. We invite you to enter this musical time machine, which will take you on a journey through two centuries.