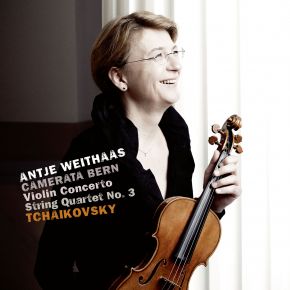 "Admittedly, it is quite exceptional for an orchestra and a soloist to record the Tchaikovsky Violin Concerto without a conductor. Some members of Camerata Bern were less worried about this project; others – including myself – had their misgivings at first.

Essential questions remained with us throughout: how do we stay in sync while ensuring that the music remains lively and flexible; how can we go on interacting? What we are applying here is indeed a chamber music approach, which is supposed to allow us to gain in terms of freedom and clarity.

Otherwise, such a project would not be justified. Now, listening to the result, I must concede that the adventure was well worth the effort, even though such projects can only succeed when the soloist and the orchestra know one another very well, as is the case with myself and the Camerata. After several days of intense recording sessions, I feel thoroughly grateful to all members of the ensemble and to the marvellous additional wind section for the incredibly stimulating, creative time

we spent together. The shared atmosphere created a kind of energy that released unforeseen potential in us and inspired everyone involved. Of course we could already look back on our previous collaborations: in the Beethoven Violin Concerto, and particularly in the Brahms. Now, recording the Tchaikovsky, we found those experiences extremely helpful.

I wanted to record Tchaikovsky for several reasons. Most importantly, I love Tchaikovsky’s music, particularly the two works featured on this recording. I wanted to coax the Tchaikovsky Violin Concerto out of the corner of virtuoso tradition it has occupied until now. In certain aspects, an established way of playing it has become somewhat cemented over the last decades. But neither do I see that approach justified in the score, nor does it correspond with my view of Tchaikovsky as a musician and as a human being. We all found it thrilling to challenge and question our previous experience with this piece, both as performers and as listeners, and to tackle it as if it was new to us. I had played the Tchaikovsky Concerto a lot as a student, but had not returned to it for over ten years. Besides, German violinists are generally not often called upon to interpret Russian composers. What better point in time than this one to learn the piece once more, almost from scratch? I purchased a new score; I intensely studied the Henle Urtext edition and tried to develop a fresh approach, daring to question tradition by taking Tchaikovsky’s tempo relations, dynamics and articulation utterly seriously.

I view Tchaikovsky as a gracefully elegant, thoroughly aristocratic Russian, and I wanted to help the listener clearly discern his moving sadness and yearning: however, this music always remains elegant and noble in spite of its emotional depth. These aspects are thoroughly Russian, but in a very fine, subtle way. I extend my heartfelt thanks to all members of Camerata Bern for this thrilling production.

What a luxury to be able to make music together in this way!"