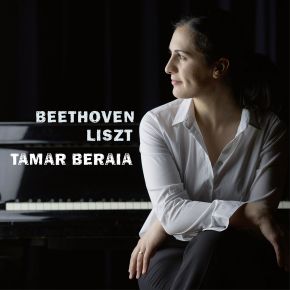 MY FAVORITES: BEETHOVEN AND LISZT

It is an enormous pleasure for me to introduce my second solo CD album, featuring works by Beethoven and Liszt. These two composers have exerted a strong influence on me throughout my life and played a paramount role in forming me as a musician. I could be wild and unlimited in expression in Liszt, sincere and firm when playing Beethoven. The two, in tandem, always helped me convey my complex individuality.

I was 17 years old when I experienced my first encounter with the most sublime works these two composers ever wrote. Beethoven‘s Hammerklavier Sonata in B flat Major, Op. 106 and Liszt’s Sonata in B Minor introduced me to new worlds of imagination, sounds, forms, and shapes. I was riveted by their intensity of expression, by the contrasts and the poetry they contain. It felt like diving beneath the surface of the ocean to discover a completely different universe with new colours, shapes and unusual movements, or like being catapulted to the cosmos, surrounded by infinite space and time,
exposed to the wonder and mystery of the Universe.... Liner notes by Tamar Bereia