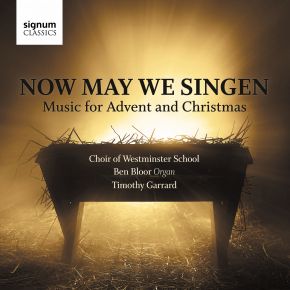 Rhythmically energised refrains feature in others’ carols in this collection, such as John Rutter’s The King of Blisand myAlleluia! A new work is come on hand.The former, a 15th-century text by James Ryman, conjures up the angel’s triumphant announcement through syncopated, fanfare-like major scales and cross rhythms, while mystical, dissonant harmonies describethe rare gifts of gold, incense and myrrh. The latter carol celebrates the arrival of the Saviour who has come to “save the lost of ev’ry land”, a mood captured beautifully by Timothy Garrard, who inspires energised diction and articulation, and a sense of playfulness with the dramatic dynamic and textural changes. In this work I hark back to the origins of the anonymous medieval English text through the use of modality, dance-like dotted rhythms, and a compound time signature.

Not only joyful song, but also alcohol, featuresin the festivities following the announcement of the arrival of the Saviour in William Mathias’ work,Sir Christèmas.The upbeat tempo, exuberant hemiolas and triumphant shouts of “Nowell” bring the celebratory scene vividlyto life, boldly reminding us that “the carol form has its origins in...dance” (Geraint Lewis). Following the Choir of Westminster School’s rousing rendition of this traditional British carol, Westminster School alumnus Alexander Campkin’sSleep, holy babeprovides a welcome moment of intimacy and calm. A lullaby sung by Mary to her Jesus, it draws upon flowing, lyrical lines, rich harmonies, and immersive textures. This is further enhanced by the sensitive musical phrasing and enjoyment of subtle chromatic shifts achieved by the choir under the directorship of Timothy Garrard.

A commissioned work for this album, Richard Allain’s Lullay, myn lyking, taken from a 15th-century English poem, also depicts a lullaby sung by the Virgin to her new-born baby. With its triple-time lilt and repeated opening refrain, as well as the choir’s beautifully controlled phrasing, it is difficult to resist being drawn into the carol’s relaxing, mesmerising sound world. Richard Allain dedicated this work to his mother, who attended the first performance at the Westminster School Carol Service 2017 in Westminster Abbey on her 80th birthday.