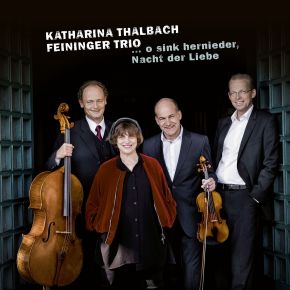 ….o night of love, descend upon us
That motif from Wagner’s Tristan and Isolde sets the musical and lyrical mood for the selection of pieces and poems in the Feininger Trio’s programme, performed for the first time at the Baden-Baden Easter Festival.

Love and death: The goal in selecting the poems was to find a mood similar to Schubert’s Notturno and Chopin’s Piano Trio Op. 8: texts that could establish a lyrical dialogue with those pieces. How can we grasp the great subject of love and death? How can we associate language with music, but without relegating language to a subordinate role? How can a series of poems tell their own story while at the same time highlighting the expression conveyed by the music, which is still the precondition for this musical-poetical programme?

Start at the beginning: Following Schubert’s Adagio (later renamed Notturno ), the theme of love is addressed in Ingeborg Bachmann’s poem Erklär mir Liebe (“Explain love to me”) and in Rilke’s Liebes-Lied (“Love Song”), which features metaphors associated with string music. Allegro con fuoco is the tempo marking of the first movement in Chopin’s Piano Trio, Op. 8. As if the poem had been listening to the music, it starts out with a “Fortissimo”, the title of Elke Lasker-Schuler’s poem Du spieltest ein ungestümes Lied (“You played me a wild song”)....
(Excerpt from the booklet notes by Brigitte Landes)