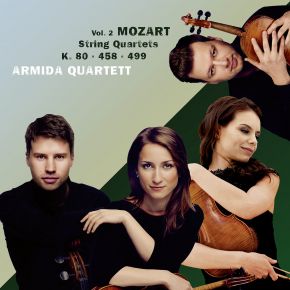 “The Armida Quartet is holding an unusual kind of rehearsal, skimming through three Mozart string quartets with musicologist and Henle’s publishing director Wolf-Dieter Seiffert. The focus this time is not on sound quality, musical character, or developing an extended formal overview – all qualities for which the Armida Quartet is well-known – but on achieving a good match between philological accuracy and practical music-making.

Seiffert is working on a new edition of the Mozart string quartets for his publishing house in Munich, and has sought out direct contact with the members of the Berlin string quartet to clarify doubts regarding dynamics, ties and tempi (see the interview with Mr. Seiffert in the booklet). When a case is truly difficult, the most technically feasible or desirable alternative helps him decide which variant will ultimately figure in the new Urtext edition: will it be a variant from Mozart’s autograph, or from the first printed edition? This method is particularly productive when an editor can work with ensembles as well-versed in historical performance practice and aesthetics as the Armida Quartet.

The publishing house is not the only partner to profit from this new form of dialogue between musicology and practical music-making. Martin Funda, the Armida Quartet’s first violinist, says that he has thereby gained a better grasp of several matters not often mentioned among performers: “For instance, we have become familiarized with several stages of the procedure from the autograph manuscript to the copyist, then leading to the first and second editions: back then, much of the work involved in publishing music was truly laborious, and for us it is fascinating.”

A closer look at the process ultimately shows that any modern edition is a compromise between several sources, some of which stand in contradiction with one another. The much-vaunted “last authorized version” may have existed in the case of a perfectionist 20th-century egomaniac such as Karlheinz Stockhausen, but we seldom encounter it in pragmatically oriented geniuses of the likes of Bach or Mozart. (Excerpt from the booklet notes by Michael Struck-Schloen)