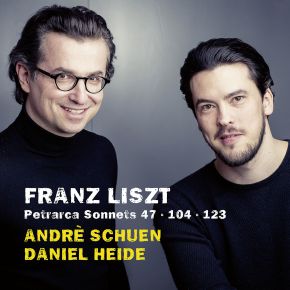 „This complete recording of Franz Liszt’s Petrarch Sonnets attempts to highlight the significance of his different versions of the three Sonnets 47, 109, und 123 – possibly for the first time. Musicologists are baffled by the fact that Liszt wrote several versions of the same works. He even set the same texts to different music: not twice, but occasionally three or more times – an absolute exception in the history of music. This is both bewildering and rewarding: Liszt aficionados can embark on a treasure hunt through the scores.

Just imagine our astonishment if Beethoven had modified his Piano Sonata Op. 13 in C Minor, Pathétique, several times in the course of his life, composing the initial movements each time in a different way while introducing new harmonic structures. That would have left us with three Pathétiques in parallel – a sensation!

For several reasons, the versions (or compositions of equivalent value) of Liszt songs such as Freudvoll und leidvoll, Der du von dem Himmel bist, and particularly the Three Petrarch Sonnets have not been duly acknowledged in all their fascinating diversity. Throwing light on this field is like solving a complicated puzzle.……. (Excerpt from the booklet notes bx Daniel Heide)