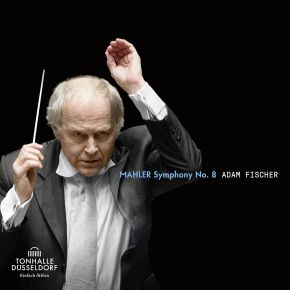 Mahler’s Eighth is a special challenge for all participants: in rehearsals, in performance, and, of course, when making a recording. The challenge lies in freeing the music from all of the technical and

logistical problems that come with it. Whenever new possibilities emerged in music history (such as new musical instruments), composers tended to introduce the novelty quite frequently in the first phase to show its potential. A good example was the Mannheim School in the 1700s.

The crescendo had just been invented: musicians no longer had to play dynamics in “terraced levels”. Mannheim pieces from that period are thus brimming with crescendos: musicians reveled in the new possibilities. Mahler, later on, wanted to explore the possibilities of an orchestra of unprecedented size, particularly in the Eighth. The effects made possible by such an enlargement should not become an end in themselves. That is the special challenge we have faced. If on this recording we have over 500 people singing and playing together, that is only a means, not an end.………..