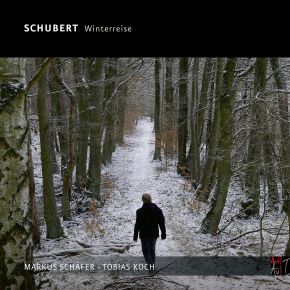 Personal comments of the artists

Franz Schubert‘s two major song cycles based on texts by Wilhelm Müller (1794–1830) were milestones in music history. Whoever dares to “reproduce them in performance” is treading in the footsteps of giants. As Markus Schäfer puts it: “through previous interpretations by distinguished artists, these cycles have not only become extremely popular; they have acquired an almost untouchable aura”.

In conversation, Markus Schäfer and Tobias Koch remind us that these songs’ status was not as monolithic as it has become. “Due to their audacity and sheer energy, the effect was initially almost frightening in Schubert’s closest circle of friends”, Schäfer explains. “It comes as no surprise that Franz von Schober, for one, did not like any of them except Der Lindenbaum.”

Although Schubert/Müller’s “Winterreise” seems to stand out in music history a monument – the very birth of art song – Schäfer and Koch do not regard this cycle’s content as straightforward or definitive. “The questions the cycle leaves open are more numerous than the direct answers it provides. Winterreise is thus a work of our time”, Koch affirms. “At any rate, my personal approach as a performer is to ask questions, leaving the answers up to the listeners. Perhaps that is why so much in this recording seems to be unusually alert: in motion, in flux. ...

We diverge from what is familiar, as well as from the ‘Urtext’, in a multitude or striking musical details: we introduce other notes, different embellishments, interpolated recitatives, additions, rests, transitions, unexpected turning points. In Schubert’s sketches for Winterreise we found certain relations he had originally foreseen among keys, and we apply that knowledge in this recording.

Music lovers of our time would find early 19th-century performance customs quite strange; modern-day concert hall recitals are purportedly designed to reflect ‘objective’, ‘functional’ criteria. We, as historically informed performers, call the current approach into question. We plead in favour of the listening habits of Schubert’s day: more spontaneity, more individuality, an emphasis on the unique role each musical moment can play for interpreters and for the audience.

We have allowed ourselves to insert our own musical comments: plenty of improvisation, and generally a more free-handed approach to the historical material to which we have access. As performers, this puts us in a state of blissful suspension. (excerpts from the booklet)