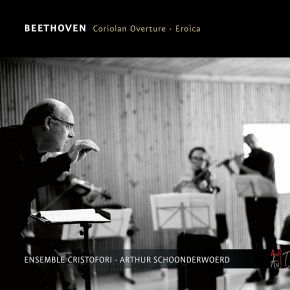 Interviewed by Stefan Siegert
Tempo, accentuation, phrasing, or structural architecture are not the first thing that strikes us when we listen to Arthur Schoonderwoerd’s performances of Classical orchestra music for the first time. Instead, the first thing we notice is that the music sounds different. The orchestra is unusually small.

We might want to judge whether this is good or not, but that will not truly help us deal with the phenomenon in itself. Apart from the winds – in the usual line-up as called for in the score – the string section is barely larger than a string quartet, and it is pointless to dispute whether this is preferable to a large
orchestra.

More significant than our “thumbs-up” or “thumbs-down” attitude is the striking effect this has on the senses. If we want to do justice to Schoonderwoerd’s interpretation concept, it is best to start by focusing on what we are hearing.

AS: In reviews I often read: “He does it with a smaller ensemble because it’s cheaper.” Indeed, it is cheaper, but that is not the reason why we choose to do so. I am likewise often reminded that great composers such as Mozart and Beethoven loved to work with large orchestras. Indeed, that is also true. But they did not often have orchestras of such size at their disposal. The Eroica Symphony was premièred in the Viennese palace of Prince Lobkowitz, in a hall for private performances not much larger than 115 square metres and 8 metres high. The usual number of musicians in that venue was twenty-four,
allowing for the same number of members in the audience. There was hardly room for more.

The Mehlgrube, the Viennese venue where Mozart premièred his piano concertos, was not much larger.

AS: Hence my idea: if the number of musicians was so reduced, why not feature a line-up that follows exactly what we find in Beethoven’s score? It calls for one first violin, one second violin, two violas, cello, bass, and the usual winds. In contrast, when the Orchestre de Paris plays Beethoven’s Eroica in the new Philharmonie de Paris with 14 first and 12 second violins, 10 violas, 8 cellos, and 6 double basses, it sounds fantastic – but it is not something by Beethoven, it is already an interpretation.

Conductors in Paris and everywhere else do this too, of course, because in such large concert halls they would not be able to reach the audience by any other means. They could just as well use 13 first violins, or 17; it would make no difference. (Excerpt from the booklet interview by Stefan Siegert)

Ludwig van Beethoven (composer)More information
Arthur Schoonderwoerd (conductor)More information
15-10-2021 Luister
"
Where normally a whole bunch of strings merge in tone and playing, a work like the Eroica now sounds in all its nakedness. That takes some getting used to at first hearing, but after a while it is also so beautiful.
"