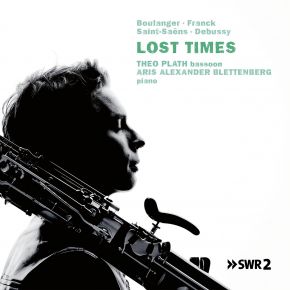 I always found that the music of Impressionism and Late Romanticism was an object of longing for me as a bassoonist; Saint-Saëns was one of the few composers of his time who helped to expand the repertoire of “one of these otherwise so neglected instruments”.

He was unfortunately rather alone in that endeavour – which I find all the more regrettable, since I regard the bassoon’s timbre as quite appropriate for the music of that period.

With this CD I have fulfilled my personal dream to revel in the music of Romanticism and Impressionism, an era otherwise mostly lost for the bassoon as a solo instrument.

Art often depicts our yearning for what is lost in the past. Proust, more than any other author, evoked memory as a source of artistic inspiration in his multi-volume novel In Search of Lost Time, to which this CD’s title refers.

Proust also showed how music can play a primordial role in the process of unwittingly recalling past events. When his characters hear the melody of the ineffable Vinteuil sonata, it triggers a series of thoughts, memories, and emotions. These are probably the most impressive depictions in literature of a person’s relation with music, showing that the link between music and recollection is essential.

Music can take up several functions:
- A piece of music that has been part of our lives is unavoidably linked with many past events which
resurface when we hear it.
- Music can also give rise to dreamlike images that surge from the interaction between our recollections
and our imagination.
- From a purely abstract point of view, music can depict memory per se. Thematic material is restated
in another context, in which it is shown in a new light.

(Excerpt from the liner notes by Theo Plath)