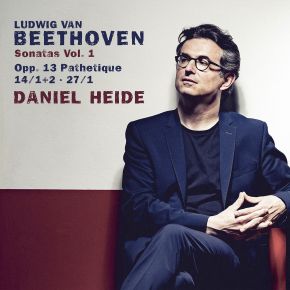 I and the „Middle“ Ones

Result to cope with the pandemic

The home of my mother – a pianist and singer herself – was where I first came in contact with Beethoven’s piano sonatas. Several of her piano students from Weimar Conservatory often came to take lessons or visit us in our apartment. Curiously, instead of popular sonatas such as the Pathétique or the Appassionata, we tended to hear other ones: I still vividly recall Sonata No. 30 in E Major op. 109, on which my mother was working with a student to whom I had taken a liking.

The themes from Sonata No. 31 in A Flat Major regularly rang through the apartment as well. Bound in red leather, the three Peters volumes of Beethoven sonatas were just as much a staple of our living room as the LPs next to the record player, including Maurizio Pollini with Sonatas op. 109 and 110, or Wilhelm Kempff with the op. 13 sonatas, op. 27/2, and op. 57. My gaze was long held by portraits of famous pianists, usually in a serious, contemplative pose.

My mother was also my first teacher, and she often raved about these 32 masterpieces’ major importance, quoting the names of great Beethoven interpreters such as Wilhelm Kempff, Edwin Fischer, Wilhelm Backhaus, and Walter Gieseking.

When I owned my first CD player at age fifteen, I started to look for those names in music stores, and they turned up quite readily. The first CD I purchased myself long remained my favourite: a recording made by Walter Gieseking in 1956 with the Op. 13 sonatas, Op. 14, and Op. 27. It helped me become more familiar with these pieces, now with the passionate, burgeoning interest of an adolescent.

It is thus certainly no coincidence if I am featuring those works on this recording.