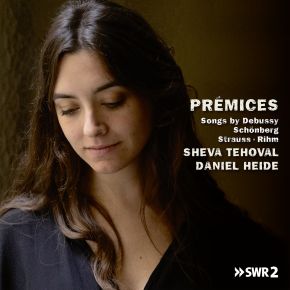 Born in Brussels and the daughter of a blues musician, Sheva Tehoval already fell in love with French artsong (mélodie) when she was a teenager. At the age of 18 she moved to Germany, where the study of Lieder inspired her to progress in the German language. Sheva was thus able to refine her mastery of Lied repertoire at the Hochschule für Musik und Tanz in Cologne, then at the Royal Academy of Music in London, with professors such as Christoph Prégardien, Richard Stokes, Julius Drake, Graham Johnson, Michael Gees, and Malcolm Martineau.

Rewarded in numerous singing competitions, Tehoval’s artistry soon started attracting international attention. At age 23 she was the youngest laureate ever of the Queen Elisabeth Competition in Brussels; she garnered further prizes at the German National Music Competition (Deutscher Musikwettbewerb), the SWR Junge Opernstars competition (First Prize), and the Luitpold Advancement Prize at the Kissingen Summer Festival.

Sheva has already performed on many European stages, including the Théâtre de la Monnaie in Brussels, Theater an der Wien in Vienna, the Mariinsky Theatre in Saint Petersburg, the Philharmonie in Cologne, and the Herkulessaal in Munich.

Apart from her success as an opera singer, Sheva has been frequently invited to give vocal recitals at a number of international venues: the Beethovenhaus in Bonn, the Schubertiada in Vilabertrán (Spain), SWR Festival Rheinvokal, the Bad Kissingen Summer Festival, and “Das Lyrische Salon” at Ettersburg Castle near Weimar; her most frequent duo partners at the piano are Christoph Schnackertz and Daniel Heide.

Her interest in a wide gamut of styles is notable, ranging from Classical/Romantic opera and concert repertoire, including the world of artsong and naturally the music of the 20th and 21st centuries. Sheva’s great curiosity to learn new repertoire is the driving force that leads her to embark on innovative musical paths.

Claude Debussy (composer)More information
03-12-2021 Katholiek nieuwsblad
"
Just listen to the beautiful Apparition, which closes this CD by the talented Belgian soprano Sheva Tehoval. The poem is a complex mix of images. The beautiful setting gives depth and unity to the stream of consciousness that the poem appears to be.
"