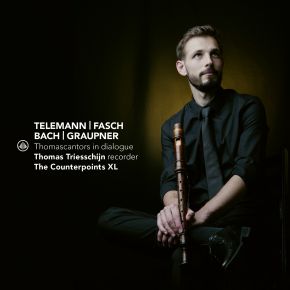 Thomas Triesschijn: After winning a Dutch radio prize, I thought of realising a long-cherished dream: recording music for solo recorder and orchestra, in particular the famous Ouverture Suite in A minor by Telemann. Taking this piece as a starting point and after doing some research, I stumbled upon the story of the four colleagues - Telemann, Fasch, Graupner and Bach - auditioning for the prestigious position of Thomascantor in Leipzig after the death of Johann Kuhnau in 1722. Through the music on this CD, I invite you to share in a unique story of four dear friends and esteemed colleagues auditioning for the position of cantor at St. Thomas that Bach surprisingly got as fourth (!) choice. This was the position in which he would spend most of his career, composing masterpieces one after another.

This is a disc that portrays an imaginary weird audition that took place in Leipzig in 1723. After Johann Kuhnau’s death the Thomaskirche was in search of a new Kantor. For different reasons Telemann, Fasch and Graupner declined and the fourth choice happened to be Johann Sebastian Bach. Thomas Triesschijn and his ensemble imagine a dialogue among the four giants through their own compositions for recorder and orchestra. This recording is not only a showacase for a great virtuoso, but a fully enjoyable disc with plenty of wonderful music. Triesschijn and Counterpoint previous (and first) release was awarded the Gramophone Editor’s Choice: “This debut disc is, hands down, some of the best recorded Telemann out there, and I am ready to go fist to fist with anyone who disagrees”.