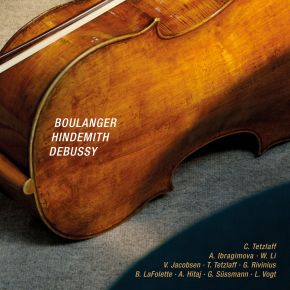 The first half of the 20th century was more exciting than almost any other period in music history. One new development followed another in rapid succession. Almost simultaneously, composers in different countries broke the shackles of tonality without forsaking it altogether. In France, the two sisters Lili and Nadia Boulanger exerted a great influence on their contemporaries and on their successors. Several generations of composers and performing musicians would never have achieved greatness without the teaching of the Grande Dame, “Mademoiselle” Nadia Boulanger. The world of the 19th century – represented here by Claude Debussy – was clearly and audibly drawing to a close; meanwhile, the transition to modernity was not as radical in France as parallel radical departures in Germany and Austria inspired by the Second Viennese School. A counterpart to French tendencies can be found in the String Trio of Paul Hindemith with its turbulent, energetic final movement – a work somewhat off the beaten path of “German modernism”.